2021 was marked by the completion of key tasks and milestones bringing us one step closer to the development of an innovative and sustainable strategy for the selective biorecovery of critical raw materials (CRMs) from primary and secondary sources!

Key achievements include characterisation, conditioning and provision of bauxite residues; R&D activities for the recovery of target CRMs following different approaches; definition of requirements for recovery of Y (yttrium), Mg (magnesium), Pt (platinum) and Pd (palladium); start of the protein optimisation production; first R&D activities for the valorisation of residual streams; and lastly, the identification of the environmental, social and economic key performance indicators to be used to assess and monitor the impact of the project and processes. In parallel, the awareness campaign continued to give more visibility to the project and the importance of critical raw materials in daily life, while discussions on the different business models to be implemented started to guarantee the exploitation and commercialisation of project results.

Have a look at the below update per work package!

In work package two, further work has been done on the pre-treatment phase with the removal of interfering components from raw materials. University of Coimbra has almost finished the identification of the isolates from the raw materials for both magnesite ores and bauxite residues. The screening of these isolates has led to the identification of potential candidates, although the bioleaching on a larger scale has not been confirmed and is now under optimisation. Isolated consortia with positive activity for decalcification have been further characterised by the University of Copenhagen, with the identification of genes involved in organic acid production as well as growth in single and co-culture. The Ca (calcium) versus Mg (magnesium) dissolution from magnesite ore is under investigation. University of the Witwatersrand Johannesburg has successfully initiated indigenous microbe isolation and bioleaching experiments from Platinum Group Metal low grade ores using model organisms. CeBER has worked on bioleaching modelling based on literature.

Treatment for mobilisation of interesting CRM

The research in this work package has continued into the mobilisation of a wide range of CRMs from the target wastes and ores. Significant progress has been made with two parallel strategies for treating bauxite by Linnaeus University and CETIM Technological Centre, and a strategy and microorganism have been identified for Mg (magnesium) wastes by Linnaeus University, while the indigenous microorganisms have been targeted for Platinum Group Metal dissolution by the University of the Witwatersrand Johannesburg. CeBER has developed preliminary models describing the microbial growth, substrate utilisation and product formation. Final experiments were performed to meet the work package three deliverable at the end of 2021.

The work package four partners have continued their work in establishing the best process to recover the target CRMs by deploying five different bio-based recovery approaches. Tecnicas Reunidas has achieved good separation results of Sc (scandium) and Y (yttrium) from a rare earth bioleachate that also contains La (lanthanum), Nd (neodymium) and Pr (praseodymium) using different reusable polymeric microcapsules. AlgaEnergy has studied the effect of different parameters, such as time, biomass concentration and pH on metal removal from solutions. Additionally, tests using a synthetic leachate containing five Rare Earth Elements have shown very promising results with up to 98% metal absorption by the microalgae, compared to the controls. University of Coimbra isolated a diversity of microorganisms associated with the residues that are potentially suitable for the removal of interfering compounds. To select new potential Platinum Group Metal binding mutants, Johnson Matthey performed a toxicity assessment of transformed E. coli. Several mutants were isolated and tests are being carried out to verify the resistance to Platinum Group Metals conferred by the selected mutants. Meanwhile, CeBER focused on collating information and data on Rare Earth Element recovery using solvent extraction. This approach aligns with preliminary data obtained from Tecnicas Reunidas. ­ ­

Although the work package five has not yet started, some advances related to the preparation of its tasks have been made. Leaders of WP5 have been in contact with WP2, WP3 and WP4 partners to gather technical inputs in order to start to clarify which processes of the BIORECOVER project have been selected to recover the target CRMs. Moreover, CETIM Technological Centre acquired six new 10 litre bioreactors to begin the development, optimisation and validation of the different CRM recovery processes in the coming months.

Validation of metals recovered on the raw material value chain

At Magnesitas Navarras, a review has been carried out on the production methods, market, main challenges related to obtaining Mg (magnesium) and ways for the project’s innovation to be competitive. The main conclusion of this review is that the processes developed in the BIORECOVER project will provide a new sustainable and safe biotechnology process for the selective extraction of Mg contained within Mg wastes of low grade minerals. The process being developed could be a viable alternative to the current Pidgeon and electrolytic processes used to produce Mg. Francisco Albero SA has completed work to determine the specifications for Y (yttrium) and Pt (platinum) for their reuse in the production of oxygen sensors and brake pads. In parallel with this work, Francisco Albero SA has started the manufacturing of O₂ sensor prototypes with current powders and has carried out the functional characterisation. Performance under different gas conditions has been analysed and other tests have been done. Johnson Matthey’s contribution in this period has been to publish a report to the partners detailing the level of impurities that can be tolerated in the Platinum Group Metal solutions so that they can be used directly in existing catalyst preparation methods. Precursor solutions and salts are generally nitrates or chlorides. Sulphates are not generally used industrially. ­ ­

Nowadays, CETIM Technological Centre is developing a geopolymer from bauxite residue that will be compared with the ones that will be obtained from the residual streams of the BIORECOVER process after the extraction of Rare Earth Elements. In addition, CETIM Technological Centre is progressing on the Life Cycle Assessment (LCA) of the project. The goal, scope and two complementary approaches were defined, and the assessment of each stage and the complete BIORECOVER process was carried out. Labscale data has been collected, though the questionnaire process and the LCA analysis are ongoing. After the review of the risks proposed, a new identification was carried out in order to adjust it to the current state of the project. CETIM Technological Centre, in parallel with the LCA, is performing the social and economic assessments.

The work package eight has made progress on dissemination, communication and exploitation. LGI Sustainable Innovation has made numerous posts on the project website and as well as on the BIORECOVER Twitter and LinkedIn. Several deliverables describing the strategy behind the awareness campaign, outlining the networking plan for the project and updating the dissemination and communication plan were submitted. A circular business model workshop was organised with all partners who mapped the flow of value in the value chains of current target elements, and proposed circular business models using BIORECOVER technology to capture lost value sustainably. An assessment of the potential impact of BIORECOVER on the magnesium, Rare Earth Element and Platinum Group Metal value chains will draw upon some of the results from the Circular Value Proposition Design Workshop.

CETIM has continued with the coordination of the project activities. In September, the 5th Consortium meeting was organised in an online event gathering all BIORECOVER partners including ENSO Innovation, who recently joined the consortium. Upcoming activities include the formation of the Stakeholder and Scientific Advisory Panel (SSAP) with different experts from industry and academia. This panel will provide capital feedback to maximise the results and the impact of BIORECOVER activities. The next consortium meeting is expected to be held in March 2022. If the COVID-19 situation improves, the meeting could adopt a hybrid format combining in person and virtual attendance. CETIM Technological Centre is eager to return to in-person meetings! ­ 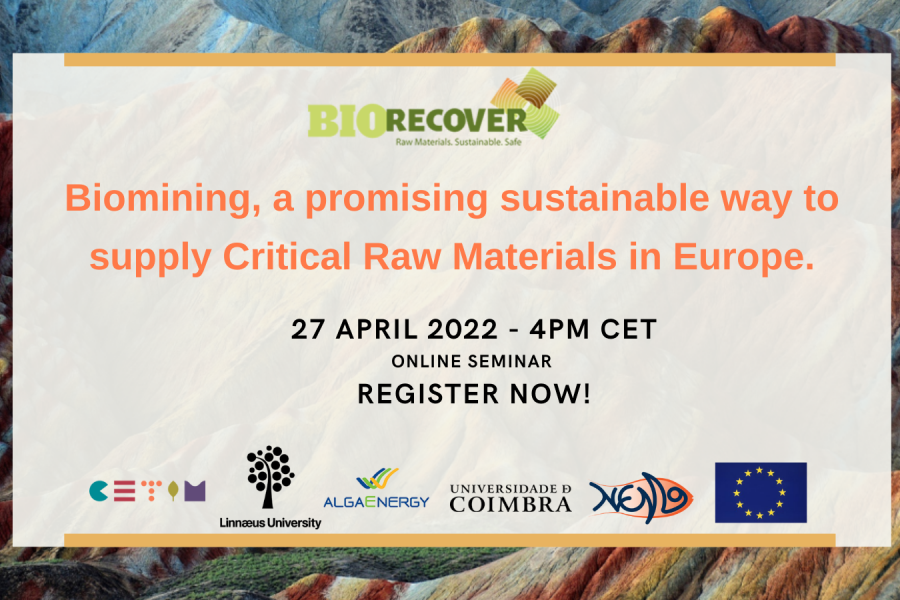 0
0 Like!
Online Seminar : Biomining, a promising sustainable way to supply Critical Raw Materials in Europe.
April 6, 2022 by CommAdmin in Event 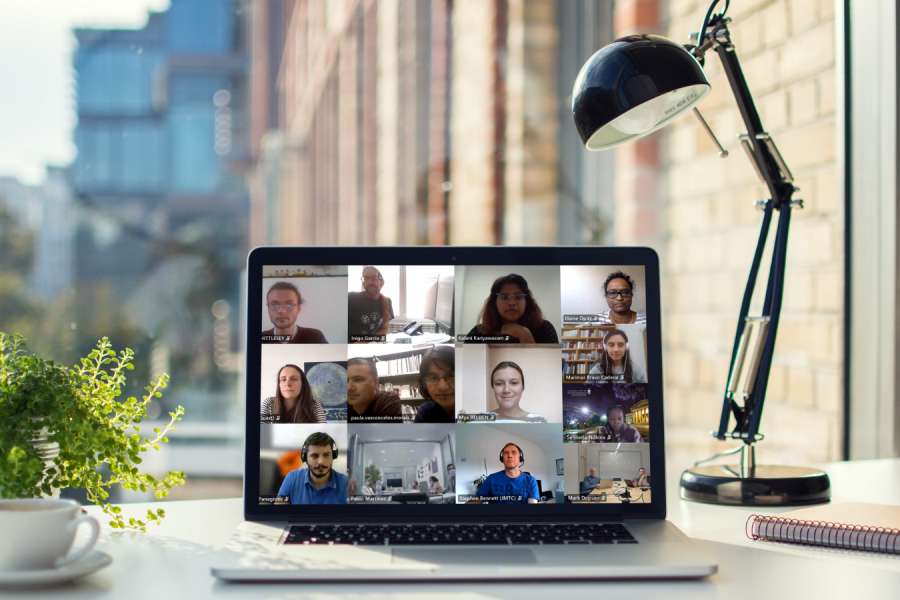 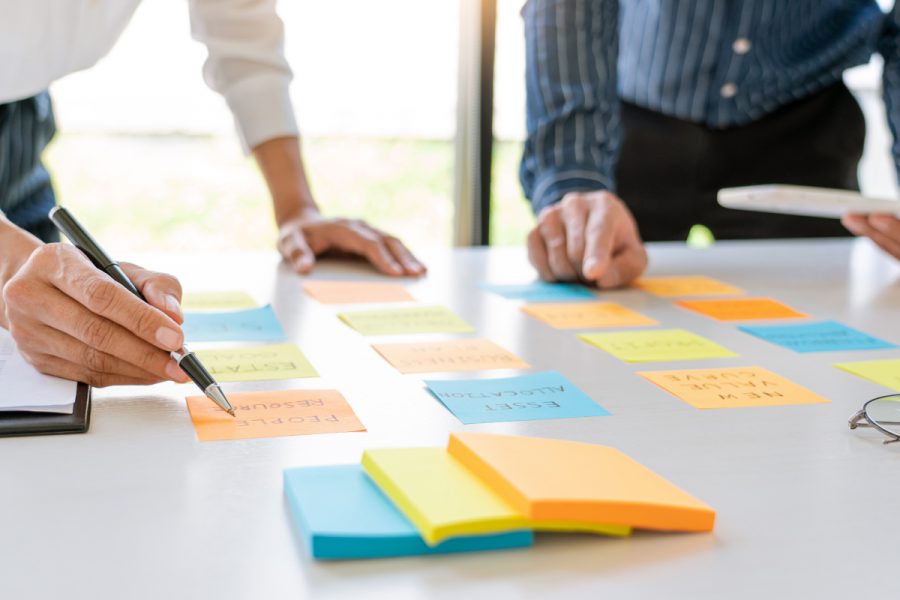 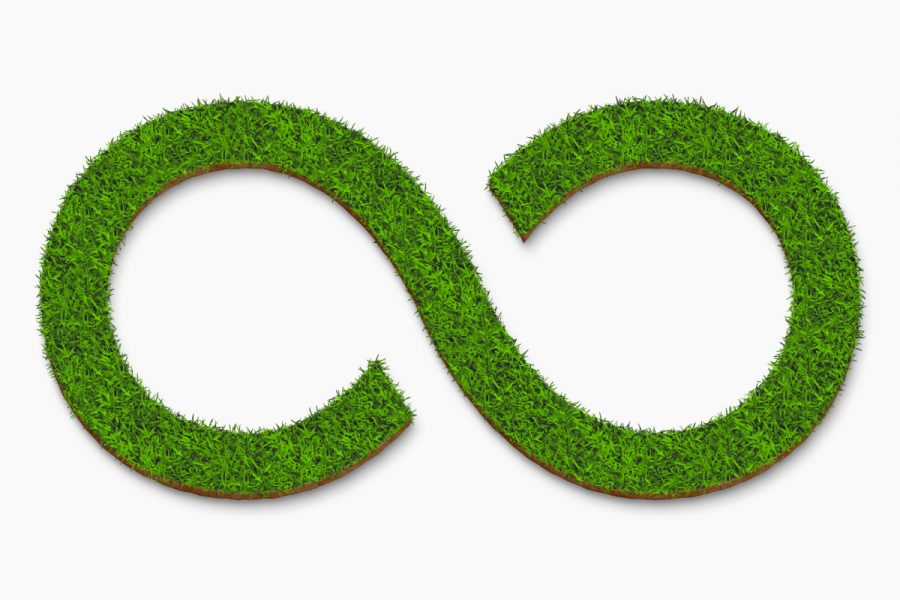 0
0 Like!
Biotechnological circular solutions
June 3, 2021 by Mya Belden in News
Leave a reply